It’s been a big rugby weekend in Europe as the Heineken Cup quarter-finals were played in Ireland, England, and Spain. Despite Spain’s relatively low status in world rugby, it hosted two games, both moved from France. The Olympic stadium in Barcelona, where I was the TMO, was the location for the Perpignan vs Toulon game yesterday (April 9) while Biarritz and Toulouse met in San Sebastian on Sunday (and Toulouse won in extra time). Moving the games recognized the deep affiliation that Perpignan has with the region of Catalonia while Biarritz has connected with its Basque roots six times over the last few seasons by hosting Heineken games in San Sebastian.

Our game was a blast. 55,000 people (the famous FC Barcelona soccer club sold some 15,000 tickets and Toulon brought 10,000 fans) assembled in the stadium at the top of Mont Juic to attend. Suffice to say that the traffic was crazy and most who came by car found that they had to park quite a distance away and then had to climb in 26 degree C heat to get to the stadium. The views over Barcelona were spectacular but probably not enjoyed by those who struggled to the top.

The Olympic stadium was built for the 1992 games. It is an attractive bowl with the pitch surrounded by a running track. The well-watered and immaculately tended pitch is normally used for soccer and is a little short for rugby with the last few metres of the in-goal area covered in artificial turf. As is often the case when soccer grounds are used for rugby, the posts were not as high as you’d normally find for games involving top-class teams.

The first half was disappointing with typical cup rugby being played as both teams probed for weaknesses. The half finished with Toulon ahead by 11-6 after scoring a block-down try late in the half. Perpignan had struggled with their discipline and had two yellow cards in the half (dangerous play and a high tackle) and Toulon looked well positioned to win.

The second half was completely different as Toulon conceded ground, position, and penalties under ferocious pressure from Perpignan. I had one try to decide upon, swiftly followed by another when I was asked to look at the conversion following the try. The posts were low enough for the ball to pass over the top and make the assistant referees uncertain whether the conversion was good. I’ve never had to arbitrate on a kick before and the task was made a little more difficult by the “interesting” angles that French TV cameras used to track the ball’s progress. However, the balance of probability overwhelmingly indicated a good kick and that was the verdict.

Perpignan eventually won 29-25. The scoreline doesn’t tell the full story as Toulon nabbed a try at the death. They’ll be disappointed that the experience in their ranks couldn’t help them to weather the storm of Perpignan pressure and they’ll also be unhappy at the way that their weak discipline resulted in a penalty count of 10-4 against them. Some of the penalties were truly silly and not what you’d expect from professional rugby players.

Great joy ensued at the end of the game as the stadium erupted in a sea of red and yellow and noise as the Perpignan team did a lap of honour. They now take on Northampton in the semi-final in three weeks and have a sporting chance of making the Heineken Cup final for the second time (they lost to Toulouse in 2003 in Dublin).

We eventually made it back to the dressing room, but not before Alain Rolland received great applause as he came to the entrance down into the changing areas. This reflects his status as a top international referee and the affection of the French for any referee who communicates to players on the pitch in French. Alain stripped off his H-Cup jersey and handed it over to a boy in the crowd – I’m sure this was a great souvenir of the occasion for the recipient.

Perpignan did a good job of hosts after the game and we passed a pleasant hour or so in a reception room deep in the stadium before retreating to our hotel. This was the Hilton Diagonal Mar, a nice hotel reasonably close to the ground. Like all the other major hotel chains, Hiltons can look the same anywhere and this hotel is very much like any other business hotel with marble everywhere being the rule of the day. It also boasts the staggeringly expensive daily rate for Wi-Fi at EUR29 for 24 hours. The Wi-Fi connection is provided by Swisscom but it’s clearly special as well as expensive as I was unable to connect over the two days.

On the upside, the Hilton’s staff were a pleasure to deal with, especially the staff in the dining room who fed us late on Friday night. On the downside, there were many details in my room that deserved more attention. For example, white paint drips all over the strip that separated the carpet from the marble tiles near the bathroom, a noticeable hole in the wall where the door handle had made an impression, exhausted batteries in the TV remote control (surely something that’s easy for housekeeping to check daily!), and worst of all – no walk-in shower in a bathroom that measured approximately 4.5m x 2.5m. I can’t think of the last top-grade hotel in a major city that had just a shower in the bath…  Call me picky, but with so much space to play with I cannot fathom why the architect didn’t include a walk-in shower… clearly it was much more important to have that slit window! 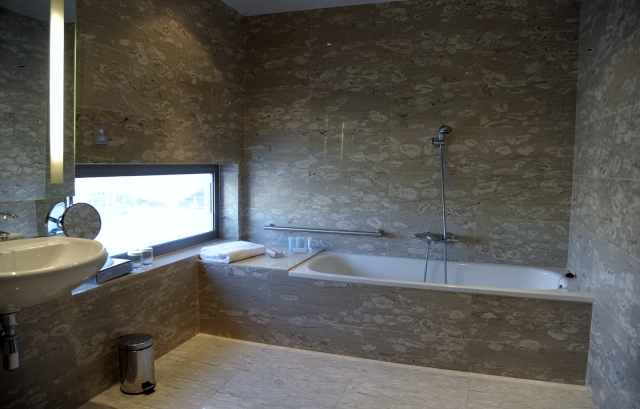 What! So much space and no walk-in shower?

In any case, the hotel did its job well and we were a happy bunch leaving there to get back to BCN airport for the flight home to Dublin. Now back to the real job…

Office 365 MVP and author
View all posts by Tony Redmond ("Thoughts of an Idle Mind") →
This entry was posted in Rugby and tagged Heineken Cup, TMO, TV Match Official. Bookmark the permalink.

1 Response to Catalan triumph in Barcelona