Some folks from California arrived to visit us in Ireland and created the immediate question of “what to do”? As we live in Dublin, it’s an easy call to have them spend a day looking around the city but Dublin has become increasingly like other European cities over the last twenty years and doesn’t really reflect Ireland. You have to escape the city to see something different, so we decided to go to Connemara on Sunday afternoon.

Connemara (http://www.connemara.ie/en/ or http://www.connemara.com/) is the western part of Galway. Thanks to the new motorways that have been built in the last few years, you can now drive from Dublin to Clifden, the major town of Connemara, in a little over three hours (providing that you don’t get stuck in the sometimes horrendous traffic as you transit Galway city). The road from Galway to Clifden is still the old-style single carriageway that poses a challenge to anyone who isn’t used to driving on small cramped roads with surfaces that have been twisted by the movement of the bog that covers the country. The stone walls on either side are unforgiving for anyone who makes a mistake, which probably accounts for the damage exhibited by many of the hire cars in Ireland.

We stayed in the house owned by my sister and her husband on Mannin Bay on the road between Clifden and Ballyconneely. The house has been nicely restored and extended from an original cottage and is a great place to bring visitors. The weather co-operated in that it didn’t rain (always a risk in Connemara) and we settled in for the evening.

Monday produced warm sunshine and a mild breeze to show Connemara at its best. We headed for Ailebrack strand, a beach that my family has been going to and enjoying since the early 1970s. 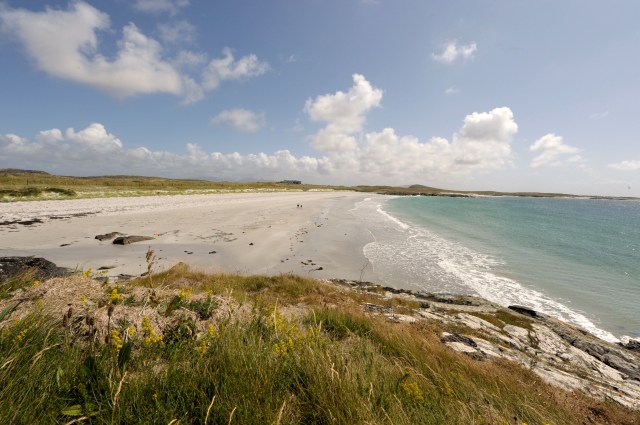 Ailebrack was in superb form. The crystal-clear sea was even warm enough to go into (not always the case when you’re talking about the North Atlantic) and the sun baked us as we lounged on the rocks. On days like this, you wonder why anyone would want to go to places like France, Italy, Spain or further afield when Ireland produces such wonderful scenery. Alas, normal service returned the next day and a “soft day” enveloped us as the mist descended to hide the hills and the wind steadily beat rain onto the house. A soft day doesn’t mean that you only have rain showers; it means that rain falls persistently all day long in sufficient quantity to penetrate every crevice and generally make the day uncomfortable. In any case, trading one soft day to get the previous superb day was a good exchange.

We also had the chance to eat at the restaurant in the Ardagh Hotel (http://www.ardaghhotel.com/). This was a very pleasant surprise as the food was excellent in all respects and was served in a room overlooking the sparkling waters of Clifden Bay. We have been passing the Ardagh Hotel for years and had never thought of going in to stay or to eat because we usually stayed at the Rock Glen Hotel, now closed due to financial difficulties. The Ardagh served better food than anywhere else we tried in Clifden and is worth considering if you’re in the area and looking for somewhere to eat.

Now back in Dublin and resuming the normal grind of writing about software. It would be nice to be back in Ailebrack, but maybe only if the weather was as good as it was last Monday.

Lead author for the Office 365 for IT Pros eBook and writer about all aspects of the Office 365 ecosystem.
View all posts by Tony Redmond →
This entry was posted in Travel and tagged Ailebrack, Connemara, Ireland, Ireland travel. Bookmark the permalink.