Twitter Spam: Or why having lots of followers isn’t much good after all

One of the interesting (but banal) things that I have picked up as I have attended technical conferences over the last year or so is the fascination that some people have with the number of “followers” that they’ve attracted through Twitter. Some delight in sites such as TwitterCounter.com, where they can discover all sorts of details about the number of followers that they have, their rate of progress towards some notional figure that will bring further happiness, and so on.

Of course, it’s nice to be communicating with someone and certainly I can see that there is value in not sharing your 140 characters of insightful and useful thoughts with zero people, but the sad fact is that Twitter is infected with so many spammers today that follower counts are not really all that important. 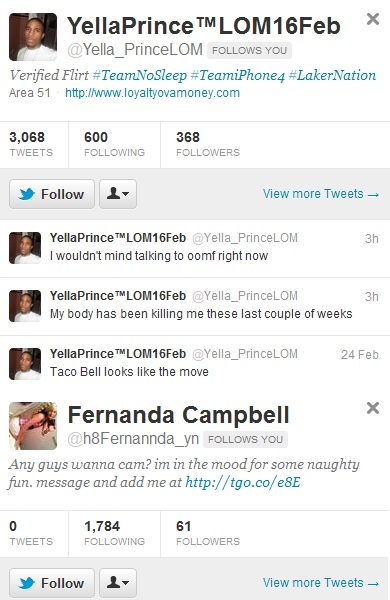 Take a look at the two examples of followers that I extracted from my Twitter account (both were subsequently blocked and reported as spammers). The top is a random individual whom I know nothing of and probably don’t want to communicate with on an ongoing basis. There’s no evidence that we share any common interests nor that their tweets contain anything interesting and their Twitter name is suspiciously like one that is created on a temporary basis because the author knows that their activity is likely to be blocked soon. Hence, my interest in this “follower” is precisely zero.

The second example exhibits more of the hallmarks of a classic spammer and is similar to the email spams sent out to lure the unsuspecting into clicking on an embedded link to bring them to a web site that promises much but only delivers pain in the end. The come-on invites “guys” to “cam” and promises “naughty fun”. I’m sure that the poster has more in mind than some harmless activity such as sharing the finer points of gluing model boats but can’t prove it. In any case, I don’t care.

While they publish advice about how to stop spam and have made some comments on how prevalent spam is on the site, Twitter doesn’t appear to have any good method to block these kind of spammers, the same kind of which also pop up on Skype. There have been some articles written about the problem but none that offer fantastic solutions.

My solution is to review the list of followers on a regular basis so that I can block and report those that I deem to be suspicious. It’s a manual task and only manageable because I don’t have so many followers but I figure that it’s better to do this than to let spammers have free rein.

Lead author for the Office 365 for IT Pros eBook and writer about all aspects of the Office 365 ecosystem.
View all posts by Tony Redmond →
This entry was posted in Technology and tagged Twitter, Twitter spam. Bookmark the permalink.