Squeaky lobster’s at MEC: Is this the start of the excitement?

This coming week is all about the relaunched, revamped, and hopefully not-a-warmed-over-copy-of-Teched Microsoft Exchange Conference (MEC). I flew from Dublin to Orlando yesterday, enjoying a reasonable service from Aer Lingus on a flight that must have set a new record for the number of kiddie buggies that it carried. Speaking of which, it’s a tad ridiculous to see some of the fully-grown children that parents push forward for early boarding. Some of them were even sprouting whiskers! And all to get onto a metal tube so that they could spend even more time than the 9 hour scheduled flight.

But on to Orlando, which isn’t my favourite conference location (San Diego holds that title). Bespite the somewhat dubious service of the ice-cream-chomping dispatchers, the transfer on the Mears bus shuttle was reasonably efficient and delivered a full load to the splendidly-named Gaylord Palms Resort and Conference Center. My first impressions weren’t great as the corridors are faceless expanses of carpet and doorways and the overall architecture of the resort can be summarized as “large”, but it’s growing on me. Perhaps I hadn’t drunk enough coffee to appreciate the nature of what I’m sure is a nice place for families (in particular) to stay while they plan their assault on the theme parks and other attractions.

In any case, MEC is in situ and the hype has begun to accumulate. I ran into some of the Exchange team late last night, including Michael Atalla, the Director of Product Management for Exchange, who promised that the event would be stunning and very different to what’s gone on in the past. One of the problems that all technical conferences face today is the changed nature of the information flow. Ten years ago, when MEC was last held, product documentation wasn’t as good as it is today and social media hadn’t taken off to the same extent. We enjoy a tremendous amount of information about technology that is easily accessed on the Internet (possibly so much that it’s confusing at times) and it can be argued that it’s no longer necessary to travel to conferences to learn about new technology or to get the “inside track”.

Indeed, Microsoft has posted online recordings from the recent TechEd Australia that include some of the Exchange 2013 content that you can anticipate from MEC and it’s likely that they’ll post the MEC sessions afterwards too. So you could save the $1,500 conference fee, $1,000 for accommodation, and all the sundry expenses by saying home to wait for the sessions to be posted.

However economic such an approach undoubtly is, missing a conference means that you miss the chance to interact with the talent that’s gathered at the event. I consider this to be where the real value lies. I can always catch up with a session that I missed by listening to the recording, but I can never recreate some of the background conversations and debates that I’ll have with engineers, third party software vendors, MVPs, and other interesting people who have come to Orlando. 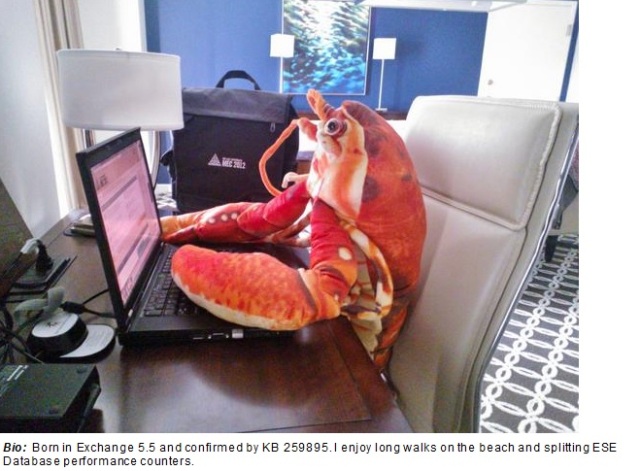 Speaking of which, one point that Michael Atalla really wanted to make was that the infamous Exchange squeaky lobster has taken up residence in Orlando and is available to meet people at MEC. I won’t tell you where as part of the fun is to discover the lobster’s location. Or you can just follow the rambling of the lobster on Twitter.

MEC starts with the standard Kool-Aid keynote tomorrow followed by some of the real meat in the form of many Exchange 2013 sessions delivered by the development team. My session on “Cloud or on-Premises” (outlining the choice between on-premises Exchange and moving to Office 365 or another cloud platform) are on Tuesday and Wednesday (a repeat). See you there.

Lead author for the Office 365 for IT Pros eBook and writer about all aspects of the Office 365 ecosystem.
View all posts by Tony Redmond →
This entry was posted in Exchange and tagged Exchange 2010, Exchange 2013, MEC, Microsoft Exchange Conference, Office 365. Bookmark the permalink.