MEC launches with insults, edgy humour, but lots of good technical content too

MEC swung into action on Monday with two keynotes followed by a set of technical sessions covering different aspects of Exchange 2013. Overall, it was a highly productive day where a lot of interesting content was shared. It all started with a video…

Nice and all as it is to see your beaming face featured on a very large screen, I wondered whether to be happy to have featured in the keynote video or to contact a friendly lawyer to file suit against Microsoft for alleging that my jokes only work given to audiences of well-lubricated attendees? Or for the other scandalous lie that I have been hiding MEC in my house for the last ten years because I wanted to create the perfect conference?

The first allegation is, of course, ridiculous as my attempts at humour matches, if not surpasses, the acceptable joke level of most technologists. The second is easily disproved on the basis that my house couldn’t possibly cope with the demands of conference like MEC as well as the salient point that it doesn’t look at all like the house featured in the video.

But these gentle insults (which I don’t take seriously) are easy to overlook when put against a very energetic and I think successful attempt to revitalize the Exchange community after ten years of neglect, most probably because of Microsoft internal politics and some large degree of envy that existed in other development groups due to the success of the older version MEC. As Michael Atalla summarized, dumping MEC “was just a bad call”.

Right from the get-go, the new MEC laid down some markers that it wants to be difference and not a pale rebranding of other Microsoft events. The videos played during the opening keynote were well-produced, witty, and poked fun at just about all available targets. Based on audience reaction, the favourite piece was the video merge of Vivek Sharma and Karim Battish into the child from hell to represent the close working relationship between the on-premises and services teams. It’s an analogy that works for some while causing nightmares for others. However, the point about the close working relationship that exists between the two parts of the Exchange brain is well made.

I thought Michael Atalla did a good job of keeping everything going at a reasonable pace. Even though the opening keynote overran by about 10 minutes, I didn’t see many people leave early. He delivered the apology for community neglect with aplomb and announced the launch of iammec.com, a new portal for the Exchange community to learn from information gathered from within Microsoft and other sources, including interaction with local user groups. It will be interesting to see how this effort goes.

The rest of the opening keynote varied from executive endorsement to some interesting discussions about the investment in developing Exchange Online and its benefits for the on-premises server, updates to clients (including a demo of OWA given by Kristian Andaker on an undisclosed device believed to be a Microsoft Surface), and the updates to compliance and data leak protection, including integrations with SharePoint and Lync.

I was interested to hear Julia White announce her joy at finally becoming a cult member by being able to attend MEC. Welcome to the cult, whatever that is. She also claimed that “ten years ago Exchange was an underdog – now it leads”. This came as a surprise to many of us who had been at events such as the MEC in Boston in 1998 when Brian Valentine led the Exchange team on a charge to demonstrate their superiority over Lotus Notes and  proclaimed that Exchange 5.5 was a superior product to Notes. Of course, Lotus ran some pretty interesting ads on buses that passed by MEC at the World Trade Center then and maybe we were mistaken and Exchange really was the underdog, but I don’t think so… even if Gartner only recently concluded that the race for email supremacy is done.

Of course the content had been carefully scripted and practiced, but it was delivered in the manner of a well-rounded TV chat show and kept the attention of the audience throughout. At times it seemed like we were at an Apple event as the typography used in the slides was clear and clutter-free.

Microsoft learns how to do keynote presentations from Apple?

Ross Smith’s technical keynote provided a good fly-past of the major areas of technical change in Exchange 2013. Ross brought the “squeaky lobster” (or rather, a squeakless cousin of the famous crustacean) to provide moral support, not that he seemed to need it. Like most technical keynotes, the content had to be seasoned with a reasonable pinch of salt as there’s a world of difference between a headline description of some functionality and putting it into production.

Take the “red-headed stepchild of Exchange”, aka public folders. The smooth words emitting from Ross would convince even a sceptic like myself that modern public folders will indeed transform themselves into the “blondes” of Exchange (whatever that means). But this assumes that the methodology, tools, and inter-operability are fully sorted to be able to move some very large public folder deployments to Exchange 2013 and then execute a flawless switchover. We remain to experience such a transition.

Ross laid out a compelling case for large mailboxes, pointing out that someone who receives 150 messages averaging 75kb each will accumulate an 11.2GB mailbox in four years. I guess that this is true, assuming that the user never gives in to the temptation to delete anything and the administrator stands idly by and doesn’t implement a retention policy. Ross made some reference to “tribbles” that my poor European mind didn’t grasp. I am thankful to Paul Robichaux for explaining the Star Trek reference, but still don’t quite see how quickly-reproducing furry animals apply to email. Perhaps tribbles is code for a new kind of virus.

But despite his choice of words, Ross is usually good value when he speaks, especially when trashing some of the parts of Exchange that he cares little for, such as RPC/TCP and the death of Greg Taylor’s “backside of the elephant” analogy (the famous picture used by Greg in his CAS sessions is capture in the top right-hand corner of the slide shown below). 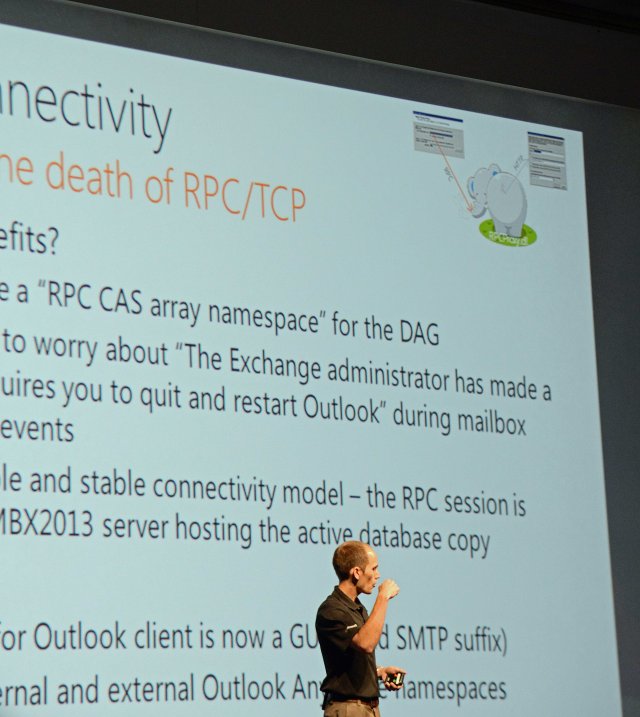 The afternoon sessions that I attended were also very good. I thought that Scott Schnoll did his normally excellent job in explaining how high availability has changed in Exchange 2013 (all for the better). Other sessions covered OWA, compliance, Exchange 2013 management tools, archiving, and how Microsoft runs Office 365 as a service plus the ever-popular topic of deployment and co-existence.

A conference isn’t just the sessions and much value is extracted from chance meetings. I especially liked the over-lunch discussion about why the Exchange 2013 Administration Centre (EAC) can’t support the PowerShell learning tools that the Exchange Management Console (EMC) offers in Exchange 2010. EAC is built from the foundation established by Exchange 2010’s Exchange Control Panel (ECP) and was never designed to capture and output PowerShell commands, so it’s a case that some retrofitting is necessary. In addition, EAC runs local PowerShell sessions direct on the Exchange server that it’s managing and the syntax and parameters are slightly different to the code that an administrator might run afterwards using EMS. Other complications exist, but this is a summary of an area that I hope will see some improvement in Exchange 2013 SP1.

And of course the conference party (sponsored by HP) at Universal Studios was greatly appreciated by attendees. There’s something faintly strange about 1,500 or so self-proclaimed geeks being let loose in an amusement park. But it was good fun, the beer and wine flowed, the rides in the Harry Potter section of the park were definitely better for the lack of numbers, and a great time seemed to be had by all, which is all that matters.

With reference to yesterday’s post covering the standard of sartorial elegance forced upon speakers by the MEC organizers, some black collared polo shirts of a reasonably elegant standard featured during Monday’s sessions, but only for some of the Microsoft speakers. This seems to be a shame as the only relieving factor for the garish (almost radioactively so) t-shirts is the opportunity for an entrepreneur to gather a complete collection that they then sell to some unwary individual on eBay. I imagine that there’s someone in the world who can cope with the bright spectrum used here.

On an upward note, the white t-shirt given out to MEC attendees (in a cardboard container reminiscent of a lunch box) is rather nice. Clean design, a color that anyone can live with, and not too much text. All-in-all, something that might make an appearance outside the boundaries of a technical conference, and that can’t be bad.

Lead author for the Office 365 for IT Pros eBook and writer about all aspects of the Office 365 ecosystem.
View all posts by Tony Redmond →
This entry was posted in Email, Exchange, Exchange 2010, Office 365 and tagged Exchange 2013, IamMEC, MEC, Microsoft Exchange Conference, Outlook 2013. Bookmark the permalink.

1 Response to MEC launches with insults, edgy humour, but lots of good technical content too