Day 3 of MEC delivered another set of sessions containing lots of interesting information about different Exchange topics, the most interesting of which was named “Ask an Exchange Dev (because program managers and marketing lie)”. This session was announced late on, possibly because of its totally politically incorrect title and never featured on an official agenda. I didn’t get to attend because it was scheduled at the same time as the repeat of my “Making the call: Cloud or On-premises” talk, but those who had the good sense to go there rather than listen to me said that it was highly amusing. We need honesty about the way that software engineering really works in more sessions like this!

The closing session was excellent, if only because it proved that not even the fire alarm going off would make attendees leave the conference. Talk about commitment! Greg Taylor did a nice job keeping the competitors in the final of the Exchange Arena challenge moving through the steps necessary to debug the problem before Phil Fiore ran out as champion with 1:31 left on the 15 minute clock. Well done to all who participated in the Arena challenge.

Interestingly, Michael Atalla did not say when MEC would return or if it would be an annual event. Instead, he said that MEC would return when the Exchange development group “has something interesting to say”. I guess it is hard to repeat the kind of content-rich event enabled by the recent announcement of Exchange 2013 and the rest of the Office 2013 suite. Perhaps a 2013 MEC might focus on the real-life deployment experience of Exchange 2013 and the changes in Exchange 2013 SP1. There’s probably enough good content there to warrant coming together again.

After a slightly anti-climatic finish that left people wondering what to do once the excitement faded, it’s appropriate to look back and discuss the highs and lows, what went well and what can be improved for future MECs. Here’s my take on the topic.

First, I think MEC overall was successful. Michael Atalla, Navin Chand (who lived and breathed MEC for the last year), Rajesh Jha, and the entire Microsoft Exchange development group desire our thanks and appreciation for bringing back MEC in such a wonderful way. This could have been a ho-hum let’s roll out another conference using an old formula kind of event, but it wasn’t.

That being said, here’s the report card:

What can be improved:

The most successful marketing giveaway in the MEC exhibit was eNow Consulting’s t-shirt that required attendees to track down MVPs and MCMs and have them sign the shirt on the back. Those who managed to track down at least three were entered into a draw for a Microsoft Surface. The eNow folks distributed a thousand shirts. How many of these will reappear at future MECs? The challenge for other exhibitors is to come up with an even better giveaway in the future, something that is so more memorable than the classic branded t-shirt, mug, or sparkly bouncing ball.

Best whiteboard comment? Maybe “About as good as JBOD” to the question “What did you think of the Office 365 datacenter model made of LEGO?”  Well, I liked it anyway!

I don’t pretend to be the only one to have a valid opinion on what was good and not so good at MEC. Debate is always good and I am sure that Microsoft will appreciate hearing your views on how to expand, enhance, and improve future MECs. Although no comment box yet exists on the iammec.com site, I bet one will be there soon

In a sentence, the best thing about MEC was that it definitely was not the tired, flabby, and not-so-good conference that TechEd has become. It’s a new start for an old conference. Roll on 2013 (or whenever the Exchange team concludes that they have something interesting to say)! 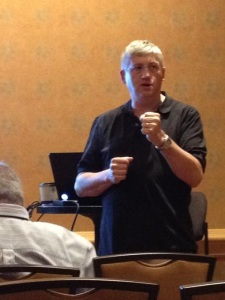 Explaining why you need to wear a raincoat when you go near the cloud (photo by https://twitter.com/Eastsideg1rl)

Lead author for the Office 365 for IT Pros eBook and writer about all aspects of the Office 365 ecosystem.
View all posts by Tony Redmond →
This entry was posted in Email, Exchange, Office 365 and tagged Exchange 2013, MEC 2012, Microsoft Exchange Conference. Bookmark the permalink.