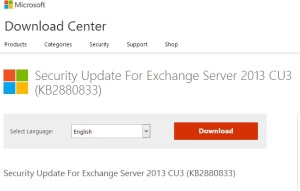 As anticipated, Microsoft released a set of security bulletins on Tuesday, December 10. Among the set, MS13-105 addresses a number of vulnerabilities in Exchange 2007, 2010, and 2013. The following updates have been released:

These vulnerabilities are addressed in the updates:

The roll-up updates for Exchange 2007 and 2010 contain nothing more than these fixes. As such, they should be much simpler to deploy than a regular roll-up update. However, be sure to test before deploying the code into production environments.

Exchange 2013 uses a different servicing model which means that security updates are released separately to cumulative updates. Security updates for Exchange 2013 contain all previous security fixes, so MS13-105 contains the fixes previously provided in the infamous MS13-061 release (August 2013). You can install MS13-105 on top of MS13-061. More details about these updates are available on the EHLO blog.

Naturally, those running Exchange 2003 or earlier versions can ignore the security bulletins because you live in the land of dead software, or software that has ceased to exist in the eyes of Microsoft.

Of course, Exchange doesn’t exist in a vacuum and the other security bulletins released today affect other products such as Windows 8, Windows Server 2012, and Office, so there are lots of updates to be done.