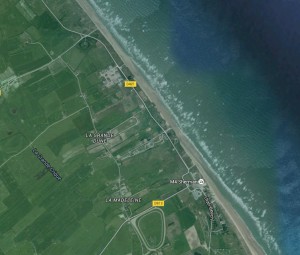 In June, I wrote about a quick visit to Omaha Beach and the WN62 strongpoint. Normandy has five D-Day beaches and I visited Utah Beach, the second landing point for U.S. forces, the following day. It’s just taken me a while to get around to writing about the visit!

The Utah landings were not as bloody or chaotic as those at Omaha, but the beach and surrounding area is still very interesting to history buffs because of the combination of landing by the U.S. 4th Infantry Division and the preceding airborne landings by the 82nd and 101st Airborne divisions to seize the causeways leading inland from the beach and some of the key towns in the area such as Sainte-Mère-Église and Sainte Marie-du-Mont. As with his book on Omaha Beach, Joseph Balkoski’s book “Utah Beach: The Amphibious Landing and Airborne Operations on D-Day” is well worth reading before you visit. The first couple of episodes in the TV series “Band of Brothers” also provide some insight into how the fighting for the paratroopers dropped before the landings occurred, including the famous assault by the 101st at Brécourt Manor to eliminate a battery of 105mm howitzers firing on Utah Beach from about three miles away.

D-Day was dull in comparison to the unusually bright and sunny weather that I experienced in June. That being said, I have visited Utah Beach a number of times previously and have enjoyed all sorts of weather there. Normandy is a place where the weather can change in the blink of an eye…

The beach is freely accessible through a number of roadways cut through the dunes. Most people head for the D-Day museum, which is reasonably interesting and worth the EUR8 admission. However, a museum is a museum and walking the ground over which an action was fought can be even better. Above you can see a view from the beach towards the museum, which is located at the position of a German strongpoint (WN5) at the Grand Dune (exit 2). This is where the landings actually happened as the inbound boats were affected by a strong current and drifted off their intended mark as shown in the U.S. Army map below. The tides and currents in the area are unpredictable and the beach goes from a wide expanse of sand over several hundred meters at low tide to being right up against the dunes at high tide.

The U.S. forces were fortunate in that some of the heavier German guns were located close to where the landing should have happened and were unable to target the invading forces. A short stroll down the beach will bring you to several strongpoints where guns faced away from the American landings onto the place where the boats should have come ashore. The view from the gun port gives some idea of the commanding range of fire that was available to the defenders. 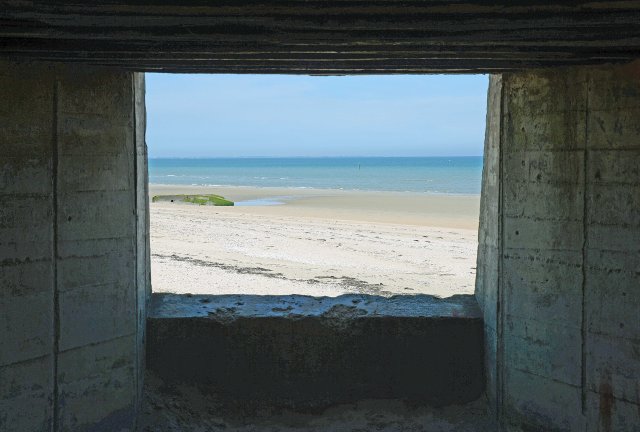 The external view of these positions shows the damage done by allied ships in the pre-invasion bombardment. Nevertheless, the strength of the positions is also evident by the fact that they are still standing and almost seem ready for guns to be reinstalled over 70 years later.

Unlike Omaha Beach, the defenders did not have the advantage of cliffs or bluffs upon which to site their weapons. Dunes and flooded countryside behind the beaches were the only physical features available to the Germans, so the actual fighting at the beach was over relatively quickly. However, several batteries of long-range artillery were able to fire on Utah Beach for most of D-Day to inflict casualties as troops and supplies landed following the initial struggle for control.

Looking at some of the defences such as the “Tobruk” machine-gun position built into the sand dunes (see below), it’s easy to imagine that the defenders might have felt pretty lonely and vulnerable when they faced the allied armada that carried the invasion forces to Utah Beach. 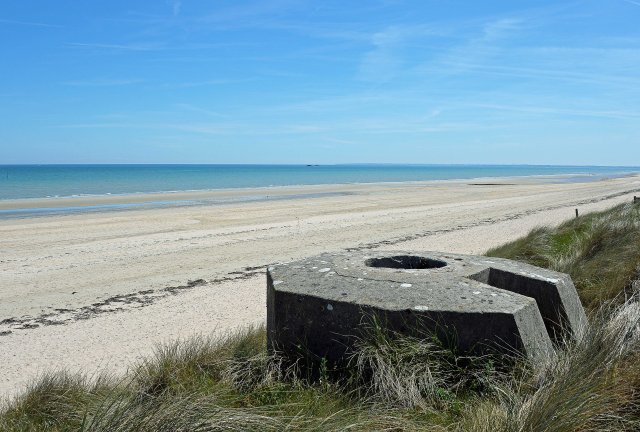 Utah Beach is well worth visiting if you are in Normandy. The beach itself is wide and flat and a nice place to walk. The war ruins occur along the coast and seem to be at odds with the holidaymakers who come to the beach for all the reasons why people like going to beaches. And if they tire of the beach, there’s always the assorted military hardware to explore, such as the M-4 Sherman tanks that are a common form of commemoration in the region.

Apart from Utah Beach, other nearby places to visit include the Airborne museum in Sainte-Mère-Église or the D-Day Paratrooper Historical Center at the splendidly named “Dead Man’s Corner” near Saint Come-du-Mont. On the German side, there’s the battery at Crisbecq, which gives some idea of the kind of fortifications built in this part of Hitler’s Atlantic Wall.

Lead author for the Office 365 for IT Pros eBook and writer about all aspects of the Office 365 ecosystem.
View all posts by Tony Redmond →
This entry was posted in Travel and tagged D-Day, Normandy, Utah Beach. Bookmark the permalink.