The hot spots of change inside Office 365

One of the touted advantages of cloud services is the delivery of “evergreen” software. In other words, users don’t have to do anything to upgrade their software because it all happens in the cloud. Normally, this is a good thing because the updated software delivers new functionality and features. However, the constantly changing nature of the software can also be disruptive for administrators and users alike, especially when something is updated without warning.

In the case of Office 365, the author team for the “Office 365 for IT Pros” eBook keep a vigilant eye on what’s happening across all elements of the service plus associated technology like Azure Active Directory. We observe, learn, analyze, and then figure out whether any changes are required in the content of the eBook. Updates are then published weekly to incorporate changes and customers who have bought the current edition of the eBook can download fresh copies from exchangeserverpro.com (EPUB and PDF versions) or Amazon (Kindle). Well, we let Amazon know that a new version has been published. They make the decision whether to advise purchasers whether an update is available.

Given that we track changes made to the chapters in the eBook, I thought it would be interesting to analyze the change log for Office 365 for IT Pros to determine the “hot spots” or places where most change has occurred since the third edition was first published on June 1, 2016. Here’s the distribution of the 160 recorded updates over the 23 chapters in the eBook up to and including the version released on December 10, 2016. 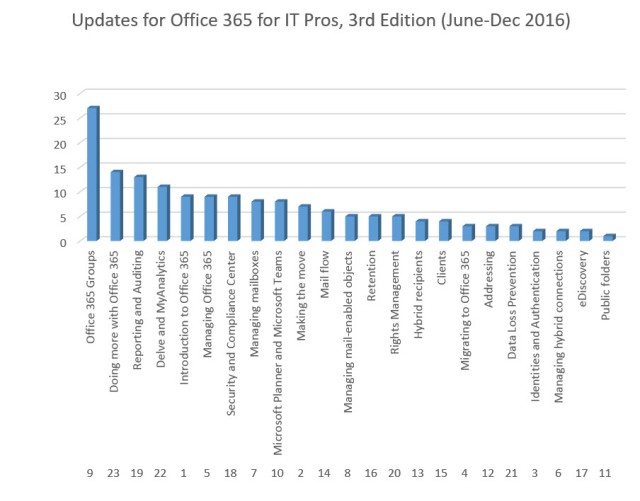 Some of the changes Microsoft applied to Office 365 in that period don’t show up in our data if we didn’t cover them. We have to apply a certain amount of editorial control over what we cover as otherwise the book would be even larger than its current 430,000-word 900-plus page size. In addition, some of the changes that we’ve recorded are relatively small and insignificant whereas others (like the introduction of Microsoft Teams) are very large and important. Nevertheless, taken as a whole, the change log does identify the major hot spots pretty accurately.

The top 10 chapters in terms of updates since June are:

It’s easy to explain why so many changes were made to some of these chapters. For example:

Apart from providing insight into where change is most frequent inside Office 365, the exercise gives us some guidance as to where we should focus coverage for the fourth edition, which we hope to publish in March 2017. It also tells us where we need some structural change (for instance, chapter 9 is now far too big and needs to be split) and where we can cut (chapter 17 covering eDiscovery for Exchange and SharePoint can probably be discarded now). The focus for eDiscovery inside Office 365 is now firmly on the functionality exposed through the Security and Compliance Center that applies to multiple workloads, so that’s what we will concentrate on in future.

This data underlines the constant change that’s occurring inside Office 365. It would be impossible to cope with this degree of upheaval through a printed book. I’m glad we went down the eBook route…

Want to know more about how to manage Office 365? Find what you need to know in “Office 365 for IT Pros,” the most comprehensive eBook covering all aspects of Office 365. Available in PDF and EPUB formats (suitable for iBooks) or for Amazon Kindle.