The March 17 launch of OneNote for Mac received a lot of publicity, if only a fraction of what you can expect if Microsoft makes the expected announcement about the availability of Office for the iPad on March 27 (the same day that MacWorld 2014 opens in San Francisco). It looks like the OneNote team launched first to avoid the tsunami of commentary that will flow when Office for iPad appears, which seems like a sensible tactic.

I think that the publicity is merited because it’s obviously a good thing for both Microsoft and Apple users to have the chance to use OneNote available on platforms like the Mac, iPhone, and (in particular), the iPad. Using a cloud based service behind the scenes also seems to make a lot of sense.

I have played with OneNote ever since it was released but really only found it useful once I could start using handwriting input with the original Microsoft Surface. The combination of digital ink, OneNote, and the Surface form factor worked for me at events like technical conferences. But for most of the time, I tended to use Word to take notes and record things that I had to follow up. It’s hard to break the habit of a working lifetime.

But three developments this week enabled by the recent evolution in the OneNote ecosystem have changed my attitude.

The first is “Office Lens”, a Windows Phone application developed by Microsoft Research. This is described as an OneNote scanner for your pocket. The app is simple to use and leverages the fact that pretty well every Windows Phone device has a highly capable camera that can be used to capture details of documents, photographs, and whiteboards. There’s no news here as people have been using smartphones to record stuff like this for years. I’ve certainly used my Nokia Lumia 1020 for this purpose many times.

The app includes some processing to clean up the images that it captures, but the magic is the integration with OneNote that allows the images to be transmitted from the phone and stored in OneNote notebooks. I really like this feature because I think it will make it much easier to work with the captured information. Given that the Microsoft Exchange Conference (MEC) is just around the corner, it’s a feature that I think I’ll be using a lot in the near future. 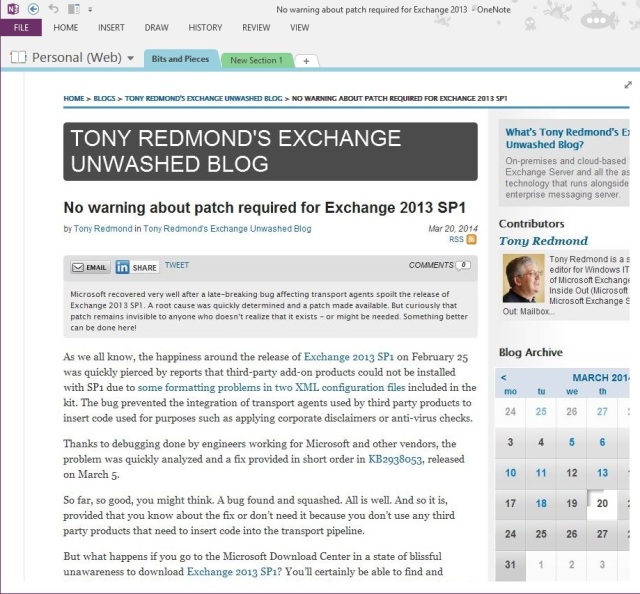 WindowsITPro.com article captured in OneNote via an IFTTT recipe

The second development is a really neat integration between OneNote and the IFTTT service that allows you to build “recipes” to capture information from different sources on the web and have that information directed to OneNote where it shows up as pages in your notebook. Rod Trent has posted a recipe to capture new articles as they are posted on WindowsITPro.com to provide a good example of how you might use this capability. There are many other recipes available for the “OneNote channel on IFTTT.com” that you might find helpful.

I also like the ability to send documents and other files to your personal OneNote account and have them automatically included in a notebook using OneNote mail services. It’s a simple but effective idea. The upside is that you can read the articles without connecting to a web site. The downside is that you’re essentially reading a screen scrape and elements such as hyperlinks in article text are unavailable.

Overall, lots of new capabilities have appeared that make OneNote a much better and compelling offering. I guess that’s part of the joy of technology – new stuff keeps on happening.

Lead author for the Office 365 for IT Pros eBook and writer about all aspects of the Office 365 ecosystem.
View all posts by Tony Redmond →
This entry was posted in Technology and tagged IFTTT, Office Lens, OneNote. Bookmark the permalink.

2 Responses to OneNote suddenly got a lot more useful