(including a Kindle edition

). For space reasons to keep the book to a reasonable size, the chapter on public folders was removed. This probably made sense as the book should really be focused on all the new technology that’s included in Exchange 2010 rather than the older stuff – and public folders have been around since 1996.

The chapter was supposed to be published as an extra that could be downloaded but that hasn’t happened to date, so here it is. Part 2 is available here and part 3 here. If you like this kind of content about Exchange Server, why not follow me on Twitter so that you receive updates when I post material.

To me, public folders are the cockroaches of Exchange. They continue to persist despite seemingly being on the edge of extinction several times. Microsoft originally launched public folders as the cornerstone of Exchange’s collaborative capabilities, something that could take on the ability of Lotus Notes to generate end-user applications based on electronic forms. Public folders offer the ability to replicate data so that a copy is close (in network terms) to users, a feature that was tremendously important in the days of expensive and scarce bandwidth. Public folders were the way to share documents and other items across organizations and can be mail-enabled to allow users to send messages to folders, a feature often exploited to allow public folders to serve as the enduring repository for email-based discussion groups.

Many still remember the demos that Microsoft did to prove the capabilities of public folders when they were launched in Exchange 4.0. Playing chess through public folders was my favorite demo as this illustrated the power of electronic forms to gather and display data coupled with the data replication model that used email as its transport. Regretfully, EFD, the electronic forms designer utility, never moved with the times and languished as a 16-bit application that proved less than useless as Exchange evolved.

Nothing remotely similar in terms of shared storage focused on office applications existed in Microsoft’s product lineup until SharePoint 2001 appeared and even though SharePoint has evolved dramatically since then, it still doesn’t deliver quite what public folders do. Public folders are antique, undervalued, and creaking, but they act as a valuable applications platform for many companies and that’s why they are still around. Some companies have hundreds of thousands of folders in their public folder hierarchy, even if they don’t quite know what all the folders are used for, whether they still hold useful information, who created the folders in the first place, and what to do with them in the future.

It would be unreasonable to expect a dramatic increase in functionality for public folders after a decade of doubt, but it is nice to see that the code is still being maintained. In summary, public folder management is divided between two consoles and EMS: 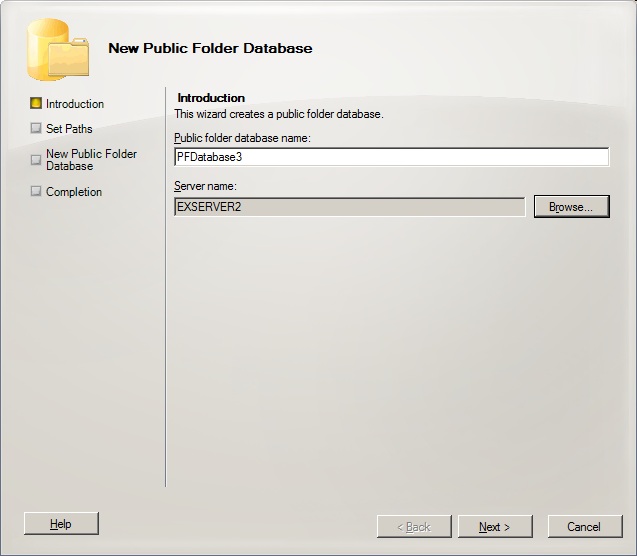 Public folders continue to be organized into two sub-trees within the folder hierarchy:

Exchange does not include the content of public folders in its content indexes. You have to use SharePoint if you need to index public folders for search purposes.

If you are used to working with public folders through EMS in Exchange 2007, you need to check any code (especially in scripts) that you have developed for this purpose because Microsoft has made a number of changes in the way that the cmdlets work.

You can use the Get-PublicFolderDatabase cmdlet to validate that the new database exists:

The same cmdlet is used without a parameter to see all the public folder databases that exist within the organization. By default, Exchange does not return the names of public folder databases that reside on Exchange 2003 or 2007 servers, so if you want to see this information, you have to specify the –IncludePreExchange2010 parameter as shown below. The-Status parameter instructs Exchange to return information about the mount and last backup status.

Retrieving information about all of the public folder databases in an organization can take some time to complete because of the need to access information from the different servers that host the databases. You can restrict retrieval to a specific server by passing the server name in the –Server parameter.

Now that we have a public folder database, we can populate it with folders using the New-PublicFolder cmdlet. To create a new top-level folder, we use “\” (the root) as the location. For example:

If you run this command on a mailbox server that has a public folder database, you can omit the server name and Exchange will create the folder in the local database. The root folder (named Technical Information in this case) must exist on the target server. To create the folder at a deeper location in the hierarchy, you pass the complete path to the folder. For example:

After you create the public folder, you can check its properties with the Get-PublicFolder cmdlet. As you can see, the complete path has to be stated to allow Exchange to locate the folder:

A complete list of public folders under the IPM_Subtree is generated by passing the root folder as the path and including the Recurse parameter to force Exchange to traverse the hierarchy and report all folders that it finds. Recurse instructs Exchange to retrieve information about all child folders and their children. Use the –GetChildren parameter instead of –Recurse if you want to just fetch details of the child folders under the path. The two parameters are mutually exclusive. In either case, while you always work with the copy of the public folder hierarchy on the server to which you are connected, this operation can take some time to complete if the public folder hierarchy is large and might not contain any newly created folders if their details are still being replicated. As shown here, you can pipe the list to capture it in a text file.

Scanning a large list of folders to find a particular one can be frustrating. You can filter what Exchange returns as follows:

We can see that the folder has some sub-folders and we also know the path to the folder, so we can discover the set of sub-folders by running the Get-PublicFolder cmdlet using the folder path and the –Recurse parameter.

The same technique can be used to retrieve information about system public folders such as those used to hold OAB and free/busy information.

Two cmdlets are available to retrieve some information about public folder contents. The intention of these cmdlets is that they can be used for basic reporting purposes so that you understand what’s going on within public folders. They are not intended to provide comprehensive reports, although there is no doubt that considerable ingenuity can be exerted to create good looking and interesting reports based on the data generated by these cmdlets.

The Get-PublicFolderItemStatistics cmdlet is new to Exchange 2010 and lists the basic details of the items in a folder. You cannot see the actual content itself without accessing the folder with a client. For example:

Moving to the Get-PublicFolderStatistics cmdlet, if you don’t pass a folder identifier, you get a summary list of all folders in the hierarchy. If you don’t specify the name of a server that hosts a public folder database, Exchange connects to the first public folder database available in the site. The LastUserAccessTime property here is of interest in order to identify public folders that have not been accessed recently by a user because these folders become candidates for deletion if you decide to clean up the public folder structure. It’s unfortunate that many public folders are created, used for a short period, and then rapidly become a repository that is accessed less and less frequently before becoming unwanted orphans that take up valuable database space. If you want to identify public folders that should be deleted, you could sort the output from the Get-PublicFolderStatistics cmdlet by the LastUserAccessTime property so that the folders that have not be accessed recently are at the top of the output. You could then contact the owners of each folder to ask whether the folder should be deleted or kept. The command to generate the report about public folder statistics sorted by last access time is:

Here’s what you might see when you drill down on a specific folder. This output reveals that there is more information available about a folder than shown in the summary view.

We can combine the knowledge we’ve gained from the two examples to do something more useful, such as outputting some data about all folders into a CSV file that we can later manipulate with Excel to understand different aspects of our public folder deployment. For example, we might ask questions such as what the largest folder is, what folders have not been accessed in several months, and what folders are empty? Here’s how to generate the list:

To see the default limits for a public folder database, select it through EMC, view properties, and then click on the Limits tab (Figure 5). 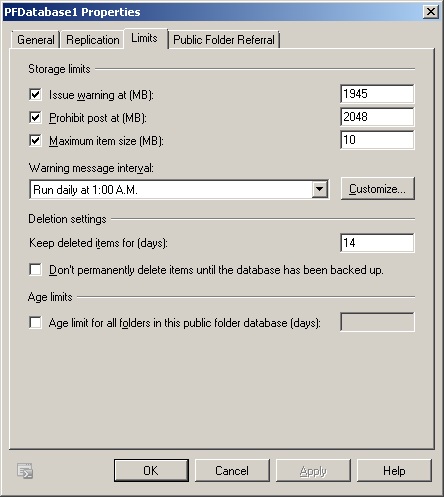