Upgrading Office 365 to Wave 15: My support experience to date

One of the great promises held out by cloud-based services is that you do not have to worry about software upgrades and other common maintenance operations as the service operators will take care of these mundane operations. In the eyes of the marketing staff, all you have to do is use the service and take advantage of new features as they are “lit up” through software upgrades.

Earlier this year, Microsoft flagged that they were preparing to roll out the Wave 15 products to Office 365 tenants, who do not get to vote about when the upgrade happens. Instead, some process running inside Microsoft decides what date a tenant should be upgraded. So be it, that’s what you get when you buy and download Microsoft office… You give up a lot of control when you sign up for a cloud service and trust that those running the service will do the right thing when upgrade time rolls around. In my case, the chronology of the service upgrade for my tenant domain was as follows:

Well, I knew that the upgrade was coming, but it was nice to know that soon I would be using the Wave 15 products, especially Exchange 2013.

Tension building now. I could not wait to use Exchange 2013 within Office 365. And then:

Tremendous! The Wave 15 upgrade is complete – or is it?

29 March: yet another note to say that “Your Office 365 service upgrade is done – sign in and explore”

Hmm… Not much had changed when I connected to Office 365. At least, not until approximately 18:00 on March 30 when I noticed that the Office 365 admin portal boasted the new Wave 15 branding, even if some errors were reported. However, OWA stubbornly displayed the familiar Wave 14 interface. 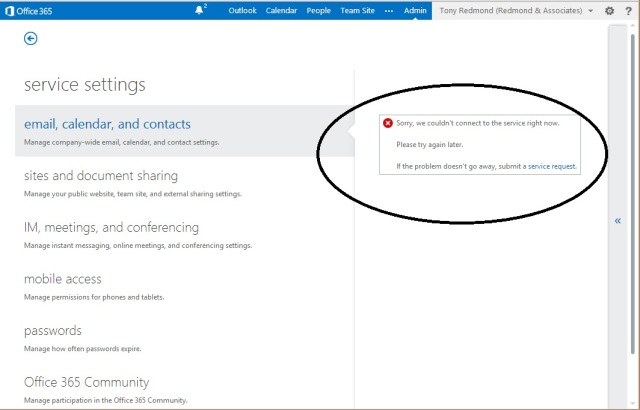 The next change happened on April 2 when the Office 365 login page was updated to a much more colorful edition. Surely this was a sign that the elusive upgrade had completed? But no, OWA was still connected to Exchange 2010.

Of course I took the opportunity to provide feedback but could not find the appropriate space to tell Microsoft that whereas they might consider my service to be upgraded, I did not. Several other errors interrupted my attempt to provide feedback so I let the chance lapse. Life is too short to waste time on badly functioning feedback loops.

By now I was worried. Casting aside the mental excuse I had constructed that the migration process must be very complex and simply needed some time to complete fully, I noticed that errors were reported when I attempted to manage either Exchange or SharePoint. OWA on the other hand, continued to work beautifully as did Outlook and ActiveSync. I could therefore have simply ignored the issues but decided that now was the time to engage with Office 365 support.

My support call was logged on April 8. One of the aspects of being a very small consumer of a very large service is that you simply have to wait your turn to receive service. It’s not as if a Microsoft support agent is ready and willing to leap into action immediately, especially when you only have a Plan P subscription. Life is different for larger enterprises that pay considerably more for Office 365, but I suspect only marginally. They might have a local Technical Account Manager (TAM) to shout at when things go wrong, but once support calls enter the black box of Office 365 it’s hard to find out what the real situation is with any issue.

I received a call back on April 9. The agent was perfectly pleasant but possibly used to dealing with people who might not have quite as much experience with Exchange as I have. But then again, first line support staff tend to have to follow a scripted engagement with callers to ensure that all bases are covered. I, on the other hand, knew that the Admin side of Office 365 exhibited all the signs of Wave 15 branding whereas OWA stubbornly remained connected to an Exchange 2010 mailbox server. After 30 minutes or so and after running some PowerShell commands, the fact that the upgrade wasn’t complete was determined to the satisfaction of all concerned. Or at least, enough evidence existed to allow an escalation to the “server team”, who possess a more elevated position in the Office 365 support hierarchy.

For the record, this command proved that the update had not completed:

As you can see, the AdminDisplayVersion still reports version 14 where an upgraded tenant that runs the Wave 15 products would report something like 15.0.586.12 to indicate version 15. Interestingly, IsUpgradingOrganization is False, which normally means that an Office 365 version upgrade is complete.

To be fair to the Office 365 support agent, I explained that I was an Exchange server MVP and that I also wrote about Exchange on a reasonably frequent basis. This happened after she sent me a set of EHLO blog posts to explain the wonders of Exchange 2013, a topic close to my heart.

The news that something had broken in the tenant domain used by someone who might write about the experience must have filtered upward in the support organization as I was then contacted by the support agent’s manager later on April 9. I was asked whether I was happy with the progress of the support case, to which I replied that not much progress had been seen and I was awaiting developments.

I stayed in that mode until April 18, receiving intermittent messages from my friends in Microsoft Support to say that not much was happening. After ten days of waiting for a resolution, it seemed fair to look for an escalation, so I emailed the support manager to ask for her help to move things along. No response was received, so I emailed again on April 22, a full two weeks since the support case was logged. This elucidated a response and I was told that the server team had decided to escalate the case after a week of contemplating the situation.

Nothing much happened over the following two days, so I emailed the original support manager on April 24 to point out that the escalation seemed to be stuck and that the call was now open for sixteen days and was not helping to improve their call close statistics or customer satisfaction rate.

No one called me over the next two days, so I sent another message on April 26 to ask what was happening. Although my Office 365 tenant domain remained fully functionality from an end-user perspective, the loss of some admin functionality had begun to be a real concern. Microsoft responded to say that their server team was currently swamped with problems (ahem…) but that they would try to get the case moved forward. As I write, three days later, no one has been in contact to communicate the current status for the case.

As an ex-CTO for both Compaq Services and HP Services, I have some awareness of what happens in a support organization. Indeed, I even served some time on a European support team for Digital in the mid-1980s. It seems to me that this case has been poorly managed and that Microsoft should ask:

I really wanted this migration to work because I have an interest in using some of the Wave 15 functionality. It’s sad that the experience has been so bad. If anyone in Microsoft Support would like to investigate and find out just what happened in this migration epic and perhaps even move the problem forward toward completion, the case number is SRX1202350062ID. After three weeks it would be nice to see a resolution.

Lead author for the Office 365 for IT Pros eBook and writer about all aspects of the Office 365 ecosystem.
View all posts by Tony Redmond →
This entry was posted in Office 365 and tagged Microsoft Support, Office 365, Wave 15. Bookmark the permalink.

128 Responses to Upgrading Office 365 to Wave 15: My support experience to date